We use cookies for the proper functioning of the site. By working with our site, you give your consent to our use of cookies
Confirm
01 december 2014

On 27 November, the School of Biomedicine of the Far East Federal University presented an automated solution for the research of cell lines CompacT Select from TAP Biosystems in the Laboratory of Biomedical Cell Technologies.

The ceremony was attended by Sergey Ivanets, the Rector of FEFU, Yuri Khotimchenko, the Director of the School of Biomedicine, David Newble, the Chief Executive Officer of the developer TAP Biоsystems, Maxim Igelnik, the Managing Director of the supplier OPTEC, as well as scientists, teachers, and students. The FEFU robotics solution is a unique set of  is the first such in Russia, with only two equivalent instruments in the world, which are used in leading scientific and research centers in the US and France. 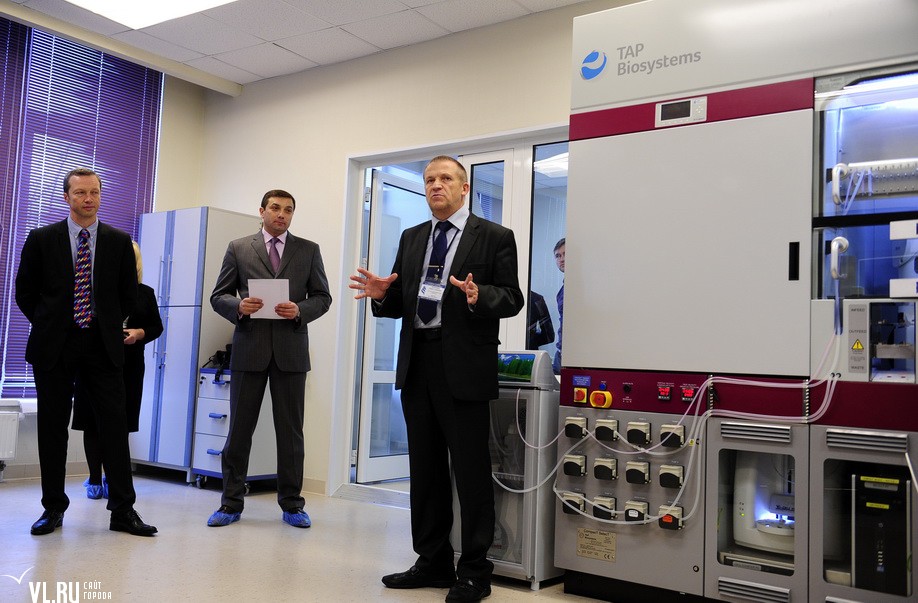 — Bioengineering, cell technologies are the most challenging areas of research, which require the highest professionalism and expensive unique equipment. In the whole world, you can count the number of the robots, which are equivalent to the one in the FEFU, on the fingers of one hand, but only here is it located in the university environment, noted the Rector Sergey Ivanets. It is important that the School of Biomedicine not only educates specialists and conducts research, but also cooperates closely with the Medical Center of FEFU, where the scientific results can find practical application in the very near future.

One of the directions of current research at the School of Biomedicine is the development of biocompatible implant materials and bioartificial tissue analogues for regenerative therapy to treat brain injuries. Such innovations are aimed at restoring the integrity of the brain by implanting structures in the affected area of the body. The project is managed by Vadim Kumeiko, the Head of the FEFU Laboratory of Biomedical Cell Technologies, a Candidate of Science (Biology). According to him, you can «build» living tissue analogues and implant them in the damaged areas directly in the laboratory environment. The mission of the robotic solution by TAP Biоsystems in this process is vital: it helps the researchers to quickly test the effect of new samples of biocompatible implant materials on living cells, which are continuously cultivated by the robot, 24 hours a day, seven days a week. 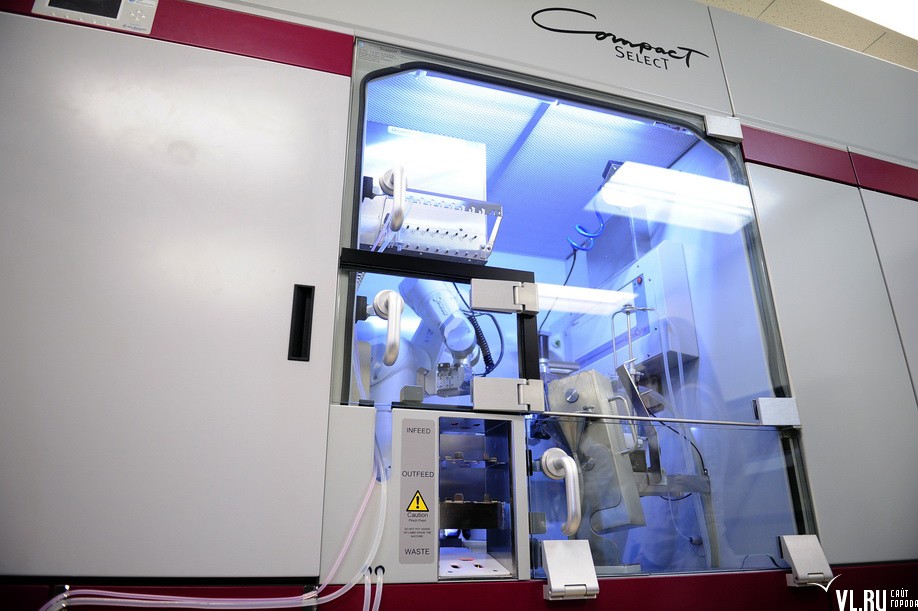 — This is a real «biofactory», supplying us with live cellular material for development of new technologies in the diagnosis and treatment of illnesses, which are still incurable. The new technologies involving implanting living cells may indeed help us treat patients with spinal cord and brain injuries in the near future. This unit allows us to seriously move ahead, conducting higher quality research, said Vadim Kumeiko and demonstrated to the audience the robot’s capabilities. At this very moment the robot was cultivating nerve cells, which are used to test new samples of implant materials.

Possibilities of the «cell factory» allow scientists to develop other areas of scientific research at the School of Biomedicine as well, including research of the genome and development of products for genetic therapy, development of drugs and products for brain tumor therapy, research of immune resistance and its role in the regenerative processes, work in the area of molecular oncology and synthetic biology. According to Yuri Khotimchenko, the Director of the School of Biomedicine equipped with this robotic solution, the Laboratory of Biomedical Cell Technologies can become the basis for the creation of a center of excellence in genomic and regenerative medicine in FEFU.

During the official launch ceremony of automated cell culture research complex in FEFU school of Biomedicine Maxim Igelnik, the Managing Director of the OPTEC presented to Sergey Ivanets, the Rector of FEFU gift certificate for 5 laboratory ZEISS Primostar microscopes. As mentioned in certificate the microscopes should be used in biomedicine researches popularization as far as for undergraduate and high school professional trainings on the base of the School of Biomedicine.