We use cookies for the proper functioning of the site. By working with our site, you give your consent to our use of cookies
Confirm
03 april 2017

Moscow has seen the opening ceremony of SMILE EYES:), a branch of the European Smile Eyes Augenklinik group. It is a joint project of Prof. Tatyana Shilova and Prof. Walter Sekundo, who is one of the developers of femtosecond laser vision correction method ZEISS ReLEx Smile. 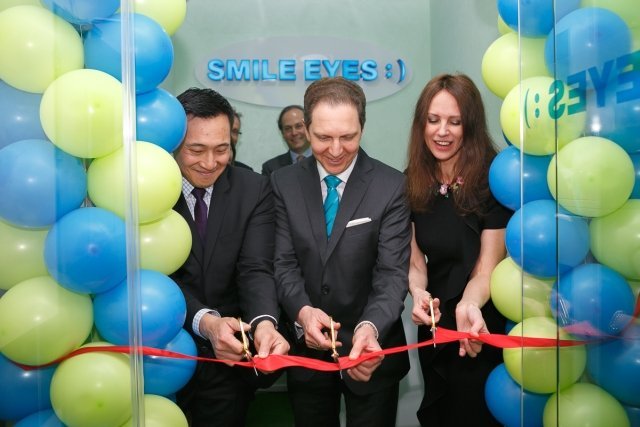 Prof. Walter Sekundo says: «SMILE EYES is a partner clinic group mostly based in Germany and Austria. The main condition to form part of the group is to meet the strictest demands to the quality of work. The objectives of the group include promotion of ReLEx Smile method both among patients and eye surgeons. SMILE EYE clinic we have opened in Moscow together with Prof. Shilova is our first experience outside the EU. It has been operating since the start of the year, and I can say the results are beyond our expectations."

ReLEx® SMILE laser correction technology was developed over 10 years ago by a group of German ophthalmologists headed by W. Sekundo and M. Blum and is still considered the most advanced vision correction method in the sphere of refractive surgery, with Carl Zeiss Meditec holding a patent for it. Operations are only performed with VisuMax femtosecond laser.

Vision laser corrections in SMILE EYE clinic are conducted by Tatyana Shilova, Head Physician in Dr. Shilova Clinic, and by Prof. Walter Sekundo, Germany, one of the investigators who took immediate part in developing ReLEx® SMILE technology. ReLEx® SMILE is used to treat myopia (), myopic astigmatism, and their combination. The procedure is painless, involves minimal surgical intervention, and takes only about several minutes.

ReLEx® SMILE represents the 3rd generation of refractive surgery methods following LASIK and PRK/LASEK. Over 700,000 operations have been performed worldwide since SMILE method was introduced in 2011, while its high degree of efficiency and safety have been confirmed by  investigations.

Dr. Shilova Ophthalmologic Clinic is equipped with the latest diagnostic and surgical devices by Carl Zeiss Meditec and is a reference center for ZEISS equipment for cataract and vitreoretinal surgery.